Your cart is currently empty

FOUNDED IN THE BACKWOODS OF NORTHERN ONTARIO, COPPERHEAD DISTILLERY CONTINUES OUR FOUNDER'S LEGACY OF PRIDE + INTEGRITY, USING TRADITIONAL DISTILLING METHODS IN EACH HAND-CRAFTED SPIRIT WE MAKE.

THE IRONCAT IS A SYMBOL OF OUR FAMILY'S HERITAGE 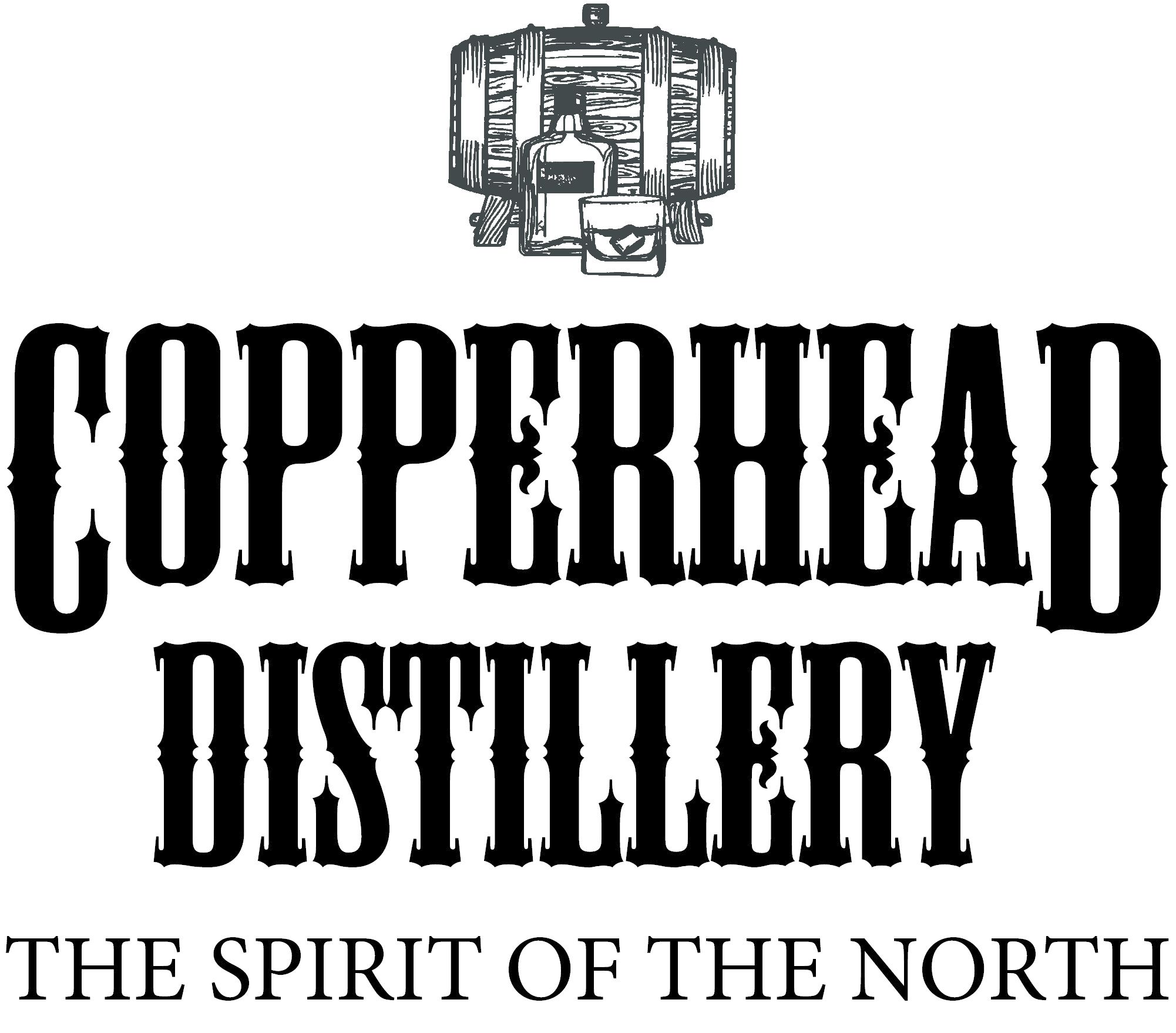 THIS IS OUR STORY

THIS IS OUR HISTORY

THIS IS OUR FUTURE 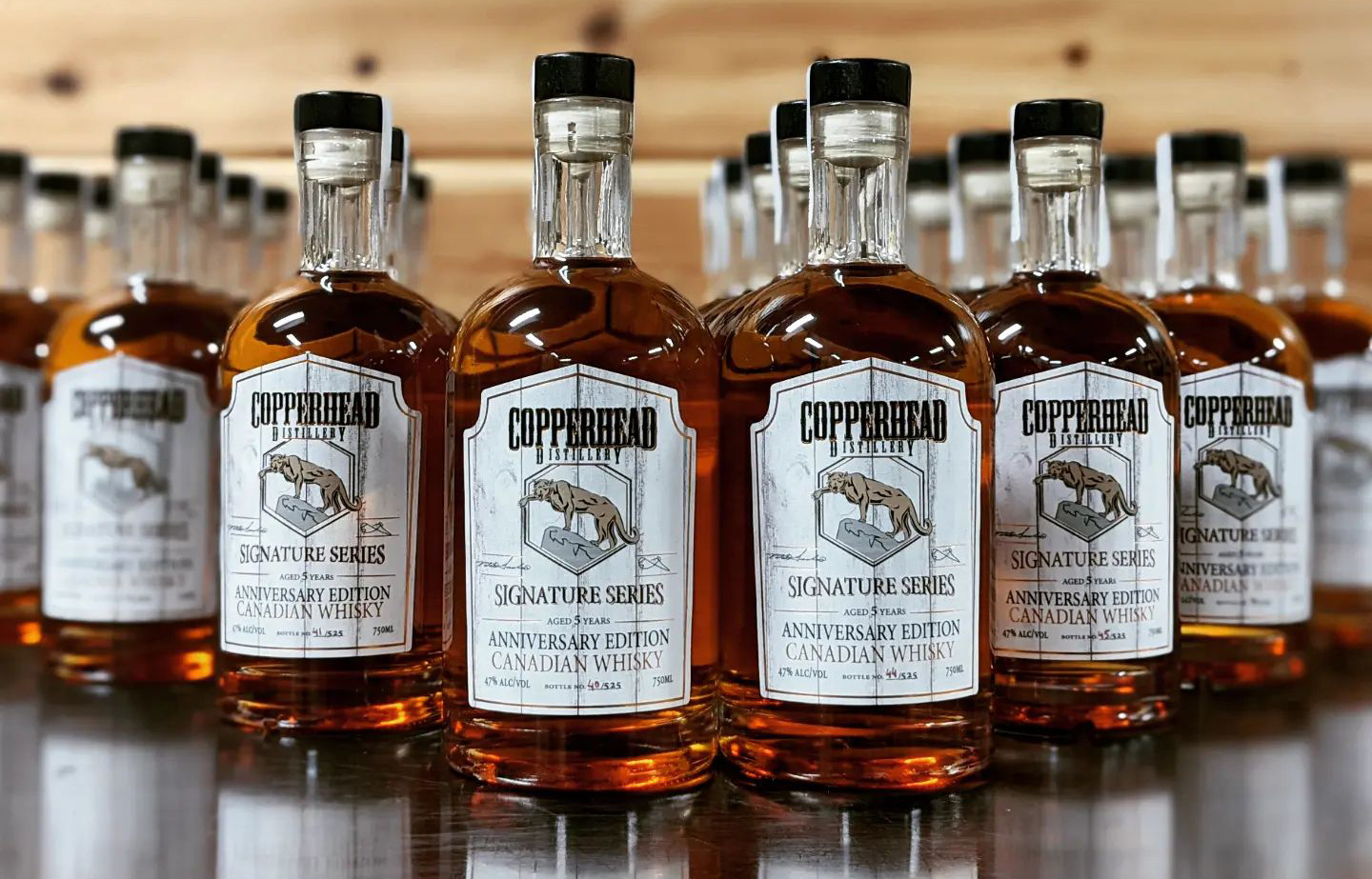 2022 IS OFF TO A BUSY START, AND WE'RE NOT SLOWING DOWN ANYTIME SOON!

With the launch of our newest seasonal cream Coppercino (Cappucino), our brand new website/POS system, a new sampler set that will rotate seasonally, travel mugs, and we've expanded our partnership with Muskoka Gourmet to include our new Boozy Jams! <3

WE ARE SO EXCITED TO BE CELEBRATING COPPERHEAD'S 5-YEAR ANNIVERSARY WITH OUR LATEST SIGNATURE SERIES 5-YEAR CANADIAN WHISKY (RELEASED APRIL 3, 2022). ON DECEMBER 20, 2022 WE WILL ALSO BE CELEBRATING 5 YEARS IN OUR SUNDRIDGE LOCATION.

Lots of summer favourites are returning in May for the season - Cin-A-Bun, Strawberry Cream, Vanilla Vodka, and of course THE JUICEBAGS!

STAY TUNED IN THE NEXT FEW MONTHS FOR SOME BIG SURPRISES!

This past year has been an interesting one, with COVID-19 and provincial lockdowns keeping us on our toes. But we didn’t let it slow us down!

Provincial lockdowns kept us from being able to have our May 2-4 BBQ again. But thankfully the restrictions were lifted so we could have our Labour Day / Customer Appreciation BBQ, our biggest turn-out to date! Of course, we brought back fan favorites Johnsons Creek and Davey Meloy for our music and Whispering Pines Farm for our delicious food, the North Bay Cruisers classic cars, and Hunter's Bay Radio to cover the event on air. We were also thrilled to have Jake Rhodes of Northern Rhodes Artistry and Wood Carving performing live chain saw carving demonstrations.

We released lots of exciting new products, including our 2021 Signature Series – The Four Brother’s Batch, a 4-year aged Canadian Whisky, released April 3, 2021. Our newest summer addition the "Juice Bags" - ready-to-drink 12% cocktails, transporting you to the tropics, flew off of the shelves! And amazing fall and winter flavours, Pumpkin Pie, and Spiked Eggnog. In the spirit of supporting local, we also partnered up with Huntsville local Muskoka Gourmet to begin carrying their jellies, sauces, and oils in our store!

After the massive success of last years trial and MANY requests for them to come back, our Advent Tree Calendars returned. We made many more sets this year, 2020's trial was limited to 300 calendar tree sets, in 2021 we sold almost 1000 sets and lots of refills sets for the lucky customers who got them last year. We made some big upgrades including new labels for our 50ml bottles and a newly designed box for the sample set, lots of new delicious cocktail recipes for this years' countdown, and we added some Advent photo contests which saw fantastic engagement from our customers!

Copperhead expanded into more LCBO locations, with our 4 LCBO products now in over 100 locations across the province! We got the go-ahead to start shipping orders to Nova Scotia, BC, Saskatchewan, and Manitoba, expanding our brand from provincial to national! We are in the works of trying to get licenses to ship to the remaining provinces.

In-store you will see more seasonal selections rotating through to allow us to offer a wider range of delicious spirits and liqueurs. Another big change... new custom branded mason jars with copper lids!

2020 was a huge year for Copperhead. The international COVID-19 pandemic caused a lot of changes for businesses everywhere! We were very fortunate to be in a position to switch gears and start producing hand sanitizer in April 2020 in response to the worldwide shortages. Copperhead was able to supply many local retailers and consumers with much-needed sanitizer to help fight through the multiple waves of COVID-19. We are very proud to have been able to donate sanitizer to many first responders to help keep them safe through these challenging times. Unfortunately, we weren't able to host our annual May 2-4 BBQ this year due to pandemic restrictions, but we were very excited to be able to have our Labour Day customer appreciation day/BBQ which was a packed house all day with the crowds outside enjoying amazing food from Whispering Pines Farm, fantastic performances by Johnson's Creek and Davey Meloy, and classic cars from the North Bay Cruisers coming by. We look forward to continuing to host more of these beloved events!

On May 3rd, 2020 we released our second Signature Series, our first official 3-year aged Canadian Whisky – The Founders Batch. This was Craig’s dream. 600 bottles of this limited edition Canadian Whisky were released and met with huge success.

Copperhead launched many new products this year including Canadian Maple Cream, Moonshine Neck Gaiters, a new flask design, Glencairn official Copperhead whisky glasses and much more. In partnership with local maple syrup producers Hubberts Maple, we created a whisky barrel-aged Maple Syrup, using the barrel from our Founders Batch Whisky and their award-winning maple syrup. And one of our biggest additions this year was our Advent Tree Calendars. We partnered with Lake House Carvings from Burlington who created our fantastic custom Wood Tree Stands, with 24 of our spirits and liqueurs, and started the best Christmas Countdown, with daily recipe ideas for the drink of each day of December. This trial was a massive success and will definitely be returning for years to come!

When Craig Ferchat, founder of Copperhead Distillery, set his mind to creating something, he did anything possible to make it a reality. 2019 was a testament to this characteristic of determination and inspired the Copperhead team’s decision to continue after his passing.

In honour of the life and legacy of Craig and his father Bob, the arrangement was made to release Copperhead’s first aged moonshine from the barrels that were put away by Craig in 2018.

On April 3rd, 2019, what would have been Craig’s 59th birthday, the first batch of the Signature Series was bottled and sold as barrel-aged moonshine. Only 400 bottles were produced and sold to the public. You can find Craig’s signature along with his Dad’s, Robert Ferchat, on the front of the label beside the iconic “Ironcat” which signifies the Ferchat family’s last name.

The rest of 2019 would prove to be a year of growth, knowledge, and prosperity. Copperhead would go on to host their now annual May 2-4, Labour Day and Customer Appreciation events drawing thousands to the Almaguin Highlands region.

The start of 2018 saw the addition of 15 aging barrels to bring the total to 24, expanding Copperhead’s aging capabilities to 5,400 litres. This allowed Craig to begin a maturing cycle that would allow Copperhead to release its first official Canadian Whisky (aged 3 years) in 2020 and would set the foundation for aged products for years to come.

Throughout the year the Copperhead team focused on expanding merchandise, product offerings, and production capabilities. The addition of Strawberry Monkey Cream and Cin-A-Bun Cream were made to the liqueur line up and a variety of branded products were added to the merchandise line.

Copperhead Distillery celebrated its first full year in the new Sundridge location by hosting the first annual Customer Appreciation day on December 23rd, 2018. The turnout from the local community and visitors from far away was unbelievable and solidified Copperhead as a pillar of the community.

Unfortunately, the Copperhead team was soon faced with a devastating loss.

Craig Ferchat, founder of Copperhead Distillery passed away on December 27th, 2018. The Copperhead and Ferchat family were left lost without their leader, father, and husband.

2017 was a year to remember… The famous Apple Pie Moonshine was created, four of Copperhead’s products got submitted and accepted into the LCBO, and customers grew exponentially each month. This unexpected success encouraged Craig to develop more spirits to meet the growing demand from customers.

As 2017 went on Copperhead Distillery was quickly established as a must-stop tourist attraction for the seasonal cottagers of the area pushing Craig to consider if a new, much larger, and more accessible, the location would be necessary. As Copperhead continued to grow, in customer support and product offerings, the decision was made that a much larger facility would be needed.

After just under a full year of operation with the help of his dedicated staff and loyal customers, Craig was able to move his business to Sundridge, Ontario to a facility 8 times bigger than the original distillery.

On December 20th, 2017, Copperhead Distillery officially opened its new location, including a unique retail store and almost 9,000 sq ft of production, bottling, and shipping space. The amazing turnout from family, friends, and the community set Copperhead on a path to commercial success in the town of Sundridge.

In early 2016, after months of market research, Craig Ferchat and his family started talking about the opportunity of constructing a distillery in the Almaguin Highlands of Ontario, an area tied to the family for generations. Sensing a coming trend of craft distilleries in the Ontario market Craig made the decision to apply for a distillery license in May of 2016.

Upon receiving the required licenses, the construction of the first distillery began on the Ferchat’s property in Burks Falls, Ontario. Craig converted his 1,000 sq ft garage into a facility where the spirits would be produced, bottled, and sold.

During the process of construction, Craig was also busy developing the first spirits that would be sold. After months of fine-tuning his recipes, Craig decided to start with four products: Magnetawan Rye Moonshine, Black Currant Vodka, Coconut Pirate Rum, and Smokin’ Gun Moonshine.

After a year of hard work and endless time developing the foundation of the business, Copperhead Distillery officially opened for business on December 16th, 2016. With the only advertising being word of mouth and a local press release, Craig and his family had no idea of what was to come. 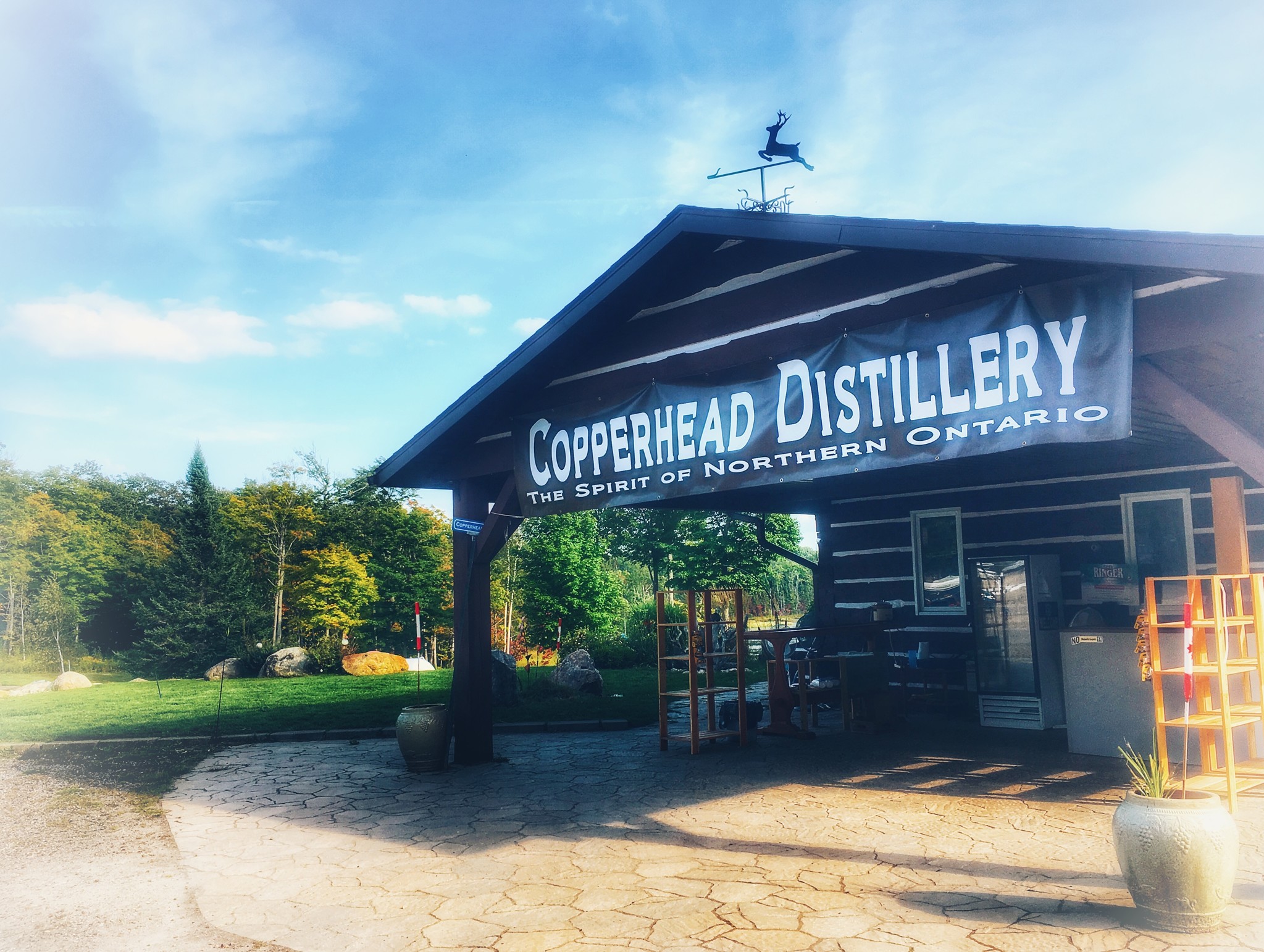